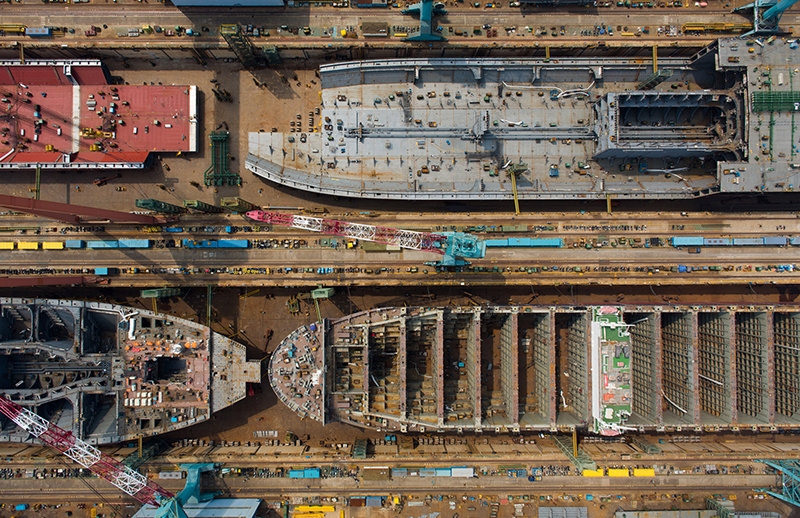 It seems as though left, right and centre, all we see nowadays is the word “restructuring”. There is restructuring amongst bankers and financiers of shipping. There is restructuring amongst commodity traders. There is restructuring amongst shipbuilders. There is restructuring amongst ship owners. There is even restructuring of the fleet. It has certainly been the case that there were many issues in the market that needed to be “corrected” and as earnings dipped across all market sectors the urgency of these corrections increased. The reality is that earnings across all parts of the shipping industry have been under strain for over 5 year now, but as things got more difficult there was little that was being done to purge the issues, while in some cases the over exuberance held by many in the industry led them to take further steps which would inevitably cause further issues down the line.
Taking the case of the shipbuilding industry for one and looking at what the IMF recently pointed out while discussing the restructuring burden that S. Korea would have to face now, it is clear that in part it was commercial decisions being made on the part of shipbuilders that led them to such high corporate debt problems and problematic cash flows. Had it not been for the excessive push for ever bigger operations and more shipbuilding contracts and we would not be facing such a massive glut in supply today. In retrospect the approach that Japanese shipbuilders took to restructure, consolidate and optimise shipbuilding operations proved to be the right decision, while trying to take this approach today is a lot harder than it would have been had it been done 2-4 years earlier. This is not only an isolated case present only in S. Korea alone. Similar points can be made about the Chinese shipbuilding industry, as well as other parts of the shipping industry.
For one there are numerous voices out there that throw blame on the ship financing sector and granted that in part it was both the ease by which financing continued to be provide to a select few in the market and the direction it took, but equally to blame were those who took up the option without safeguarding their interests and calculating the increased risk they put themselves into. In terms of direction this financing took, the issue was as to how much of this was being pushed over towards newbuildings on the grounds that new designs were more competitive and newer units were less risky options for the financier. This would inevitably mean that we were always overshooting what demand would dictate we needed to have. Let’s not forget that most who placed these new “ECO” ships were doing so while saying that these new ships would push the older designs out of the market and make them obsolete.
The restructuring which is now being undertaken may well have been overdue, but nevertheless it has not come too late. Things are slowly starting to improve as corrections are made. Shipbuilding capacity has decreased and will likely continue to decrease over the coming months. The orderbook has also dropped rapidly, while ship supply has been kept fairly well balanced in most sectors and segments. There has been a considerable amount of debt from shipowners that has been restructured and refinanced while it has also encompassed a more realistic approach to the risks at hand. All these might not sound as much today as they tend to be the consequence of the poor decisions made in the past, but one needs to keep in mind that they must also be seen as the kickoff that will inevitably lead us onwards on to the next boom.